A Compound Word is formed when two or more words, which can stand alone, are joined to make a new word. The new word takes on a new meaning (button + hole = buttonhole, foot + ball = football).  This program has been designed to help your child to recognise and explain the reasoning behind compound words. Explaining the logic of compound words is a Blank’s Level 4 level of understanding and makes it necessary for your child to use language to talk about language. At this level, the questions and statements pose more complex verbal problems and will require your child to reason and predict. Asking your child to explain why a ‘waterfall’ is called a ‘waterfall’ requires him/her to analyse the presented word and recognise that it is comprised of two individual words. In addition, he/she needs to understand that the individual words have different meanings when they stand alone.

“Why is a rainbow called a rainbow?”

You should point to the picture of the rainbow and say the following…
“This is a rainbow.”  Next, you ask your child the question:  “Why is a rainbow called a rainbow?”  If his/her response is incorrect or inadequate you should point to and talk with your child about the first two smaller pictures below the rainbow.  “This is rain. A rainbow appears when it has been raining.”  Next, talk about the second picture:  “Look this is a bow. A rainbow has the shape of a bow.”  Now that you have explained the two components of the word ‘rainbow’, you should ask again the question relating to the compound word:
“Why is a rainbow called a rainbow?” 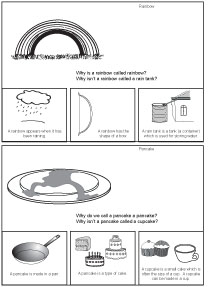 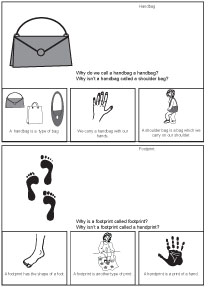